Eric Sorensen had an excerpt of his book Seven Wonders for a Cool Planet published in a recent edition of Sierra Magazine under the title Two-Wheeled Wonder. I highly recommend you go read it before it disappears into the nether-net, even if you are not a cyclist. Here are a couple of excerpts:

The bicycle is a masterpiece of physics. It harnesses human muscle power directly to that old-time marvel–the wheel–and yields a vehicle more energy efficient than any other devised, ever, by anyone. A human on a bicycle is more efficient (in calories expended per pound and per mile) than a train, truck, airplane, boat, automobile, motorcycle, skateboard, canoe, or jet pack. Cycling is more efficient than walking, which takes three times as many calories per mile.

This introduction reminds me on one of the UTA Blue Bikes I see downtown every May. 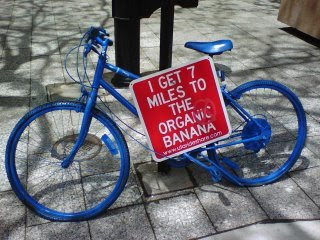 There is a great point in the article about how we regard bicycles in the U.S. compared to the way they are seen in the rest of the world:

Bicycles outnumber automobiles almost two to one worldwide, and their production outpaces cars by three to one. Rush-hour traffic in China is dominated by these human-powered vehicles. Even in the wealthy cities of Europe and Japan, a large share of the populace gets around by bike. Only here is it treated as little more than a plaything.

It’s always been frustrating to me the way mass market chains treat bicycles as toys. It seems like most chains use their bicycle section to mark the transition from Toys to Sporting Goods. In the never ending battles of alternative transportation advocacy it seems we are always trying to chip away at the perception that bikes are toys for children and eccentrics. I long for the day when parents look at buying their child a first bike the same way they would when buying a child a first car - take it seriously, buy quality, and teach them to ride right.

Finally, I am going to adopt his term ‘Errandsville’:

While advertising sells cars and trucks as tools for the open road, most often they help us inhabit a small daily realm–“Errandsville”–defined by home, store, job, and school. Many of these trips are easily bikable–or walkable–even on roads designed without bicycles or pedestrians in mind.

A topic for another post is Complete Streets v. Bike Lanes, but it is my experience that there are very few places I go to in my normal daily life that can’t be easily reached by bicycle. I can arrive at most places without using any high speed / high traffic thoroughfares.

So, thanks Eric. Your book is on order at my local library and I have a hold on the first copy that makes it to the shelves.