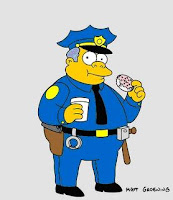 I got pulled over last Friday night.

JuniorClimber got a job as a janitor at our local county recreation center. He is working from 6:00 PM to 10:00 PM most nights. Since he doesn’t yet have his driver’s license and doesn’t want to hassle with lights for his bike Mrs. GC and I get to shuttle him around, or at least pick him up when it is dark.

So around five after ten I jumped into the car and headed down the street. I try to be a conscientious driver, driving the speed limit and signaling; I think being a cyclist helps with that. I pulled into the parking lot and through the pick-up / drop-off zone and barely had to stop since Junior was waiting on the curb and got right into the car.

We pulled back onto the street and headed to McDonalds, passing a sheriff’s car sitting right outside the entrance to the parking lot. We pulled up to the intersection and the lights behind me were flashing. I was shocked! I really didn’t think I had done anything wrong.

The officer came to the window and asked for my license. When I handed it to him he asked “Why did you pull in there like that?” I was completely confused because I was think “I pulled over because you pulled me over!?!?”.

Turns out he had come up behind me when I pulled out onto the street in front of my house, and thought it was suspicious when I pulled into the dark rec center and then back out so fast. When he saw that we were father and son and had a ‘believable’ story he sent us on our way.

***The Aftershock Sitting in the drive through, I started to get a little frustrated. I had visions of “may I have your papers please”. I had made legal maneuvers, signaled and pulled into and out of a public parking space. It is irritating that I was subjected to a police action for doing nothing more than picking up my son from work.

I wonder if I should have behaved differently. It seems I could have asked for what I was being stopped before providing my ID, but then again, being oppositional likely constitutes probable cause for a search.